Askrigg is a delightful village in the heart of Wensleydale and was made world famous by the television series ‘All Creatures Great and Small’ which was filmed in Askrigg, famously known as ‘Darrowby’.  The Drovers Arms, or actually The Kings Arms, is a stone’s throw from The Roost and will look very familiar inside to those who loved the programme.  Through many decades Askrigg has remained largely unaltered and the place we see today is very much as it would have been when James Herriot and his colleagues learnt their craft.

In 1587, Queen Elizabeth II granted a charter to this lively little village, once a premier Upper Wensleydale town, Askrigg was noted throughout the north for the work of clockmakers, among them – James Ogden and Mark Metcalfe. It could be said that in Askrigg, clockmaking was almost a cottage industry, for all the major works of an Askrigg clock were made either in, or around the village. another cottage industry was knitting.

In the market square stands the market cross so often seen in the fictional village of ‘Darrowby’ in the T.V. series, opposite is the lovely old church of St.Oswald which dates from the 15th-century. It is a beautiful church that contains many treasures of its historic past and interestingly, the gravestones in the churchyard proclaim the occupation as well as the name of those whose last resting place this quiet corner is. The town shows handsome Georgian properties and The Kings Arms, built 1767 was a former coaching inn. It was built by John Pratt, a local who had made a fortune as Jockey. In the leafy lanes surrounding the village there are attractive cottages interspersed by vast farmlands, peacefully grazed by cattle and sheep.

There are some famous beauty spots in these parts and Askrigg lies close to Whity Gill and Semer Water with the Hardraw Force Waterfall at the base of the magnificent Buttertubs Pass. The Pennine Way passes nearby Hawes and the National Park Centre.

“This is a magical area of great charm and beauty. It is ideal walking country that is littered with enchanting old towns, villages and hamlets. A perfect place to tarry and rest awhile, it is unhurried, a world away from todays otherwise, reckless pace of modern life.” 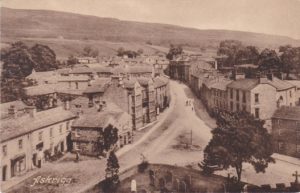